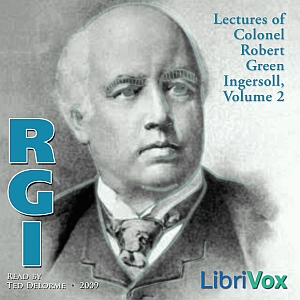 A second volume of lectures by the most famous orator of the 19th century. Ingersoll was a tireless crusader for the dignity of humanity, and a relentless opponent of organized religion. (Summary by Ted Delorme)

Reviewer: TheGreatAgnostic - favoritefavoritefavoritefavoritefavorite - January 17, 2012
Subject: Incredible Narration
Once again, I wanted to say what a great job Ted does on both part one and two. In my mind, he IS Colonel Ingersoll. I associate Mr. Delorme's voice with Ingersoll himself because he does such a passionate, masterful job that I'm convinced I'm hearing what Ingersoll MUST'VE sounded like!

I can tell you put a lot of work and love into this project and I thank you very much. I can also tell you that you've provided far more enjoyment than you can imagine and that your work was well worth it.

In his day, no other human being had been seen and heard by more Americans - or would be until the advent of motion pictures, radio, and television. After hearing Ingersoll speak, Samuel Clemens wrote: "What an organ is human speech when it is employed by a master!"

Listening to Ted Delorme's performance, it easy to understand why Robert Ingersoll was beloved by so many of his contemporaries such as Samuel Clemens, Walt Whitman, Ulysses S. Grant, Andrew Carnegie, Thomas Edison, and President James Garfield.

Between 1865 and 1899, Ingersoll crisscrossed America on more than a dozen speaking tours. He packed the largest theaters of the day at the then-substantial admission of $1 apiece.

Thanks to LibriVox and Ted Delorme, everyone can now hear and experience the speeches of Robert Ingersoll without a ticket.

Uploaded by librivoxbooks on August 17, 2009